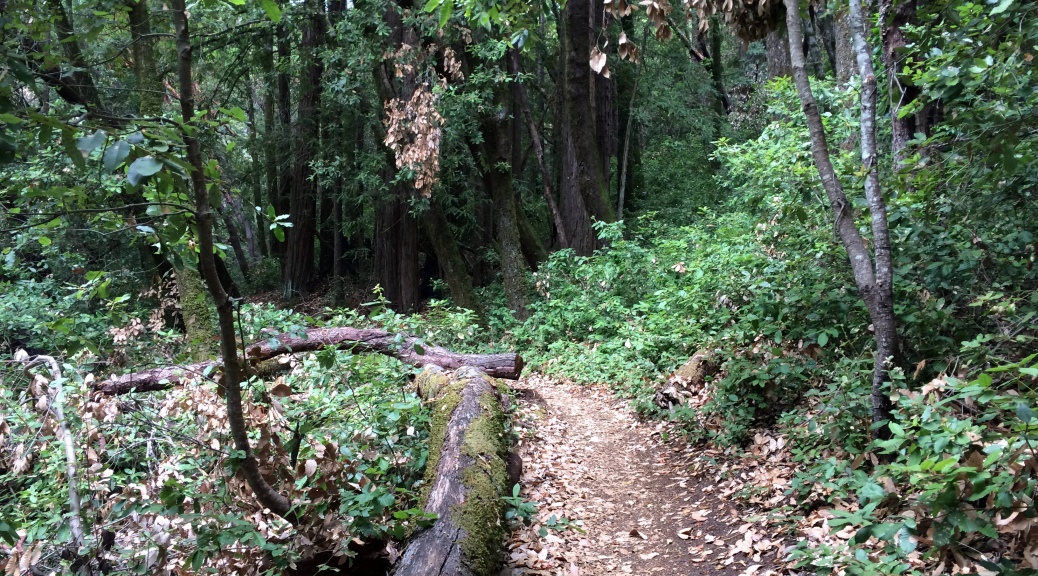 Before I had a job, I would, as often as possible, head out hiking with the Mid-Week Hikers meetup group.

As the name suggests, it is a group of hikers that hike during the week, and I found it really useful to explore new parks and trails.

This is the link for this hike. 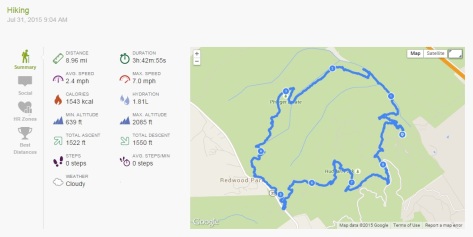 As you can see, my endomondo tracking app disagrees.

I saw my first Banana Slugs! Two of them! They really are very yellow. I also saw this really cute bench:

Thanks bench! Perhaps I will.

While it has been quite warm in the Bay this week, these two parks stay pretty cool as they are almost entirely in the shade of Redwood and Madrone trees. The trails were dry, dusty, and fairly uneven, with limited signage in some areas. Dry leaves covered the trails and meant it was quite crisp under foot.

Overall it was a great hike, but I think that the muscles in my legs will be aching tomorrow!

Yesterday was my last day at work.

It was a happy day as it means that I now have one month off, then Orientation begins, and I get one step closer to being a qualified Clinical Laboratory Scientist.

To mark the occasion, instead of my friend Brooke and I doing our usual Insanity or random Keaira LaShae YouTube workout, we decided that three of us from our team would go for a walk in the Wildlife Refuge that was just near where we worked. 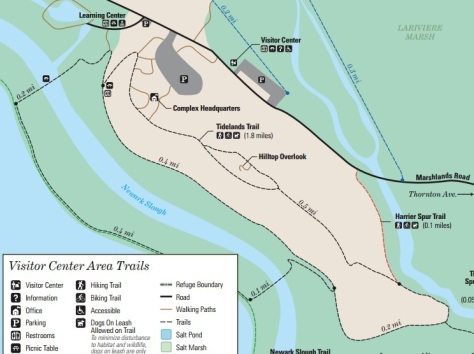 The Don Edwards San Francisco Bay National Wildlife Refuge actually covers quite a lot of the South Bay Marshland, including all the old salt ponds, where salt production used to occur, and in fact still does to a limited extent in the area near Fremont.

You can download a full trail map of this area, and also the area near Alviso here.

This was just a sightseeing walk rather than a hike, very low intensity and casual, we parked at the Visitor Center and took the Tidelands Trail to the top of the hill, where you can take a little extra stroll to an overlook to look out across the bay:

We then crossed the bridge over the Newark Slough, walked along the trail, and then back across the bridge.

All in all, it was only about 2 miles, and with only approximately 144ft ascent to the top of the hill, but it was surprisingly peaceful and picturesque, especially considering the proximity of the area to the Dumbarton Bridge, and that it was rush hour for everyone else.

There are also a few interesting things to look at, such as an old duck hunting cabin, abandoned since the 60s/70s, but that still has the owner’s decoy ducks hung up inside:

… a nice picnic shelter, right over the marsh:

…and there is also the slightly disgusting, but kind of interesting sight of water coming out from under the pump house:

Interesting, because dissolved proteins in the water cause the formation of froth as the water is aerated by the action of coming out of the pipe, apparently in much the same way as you whisk egg whites…….

Yet somehow quite hypnotic to watch.

We were really quite pleasantly surprised by how nice it was, but this might be in part because the Bay was not at all stinky that day, especially in comparison to usual!

I have been a member of the Mid-Week Hikers group on Meetup.com since we moved to the Bay Area at the end of 2013. While unemployed and waiting for my work documents to come through, the group was great for getting me out of the house and exploring the area… and also for some adult human conversation.

(I would sometimes talk to my cats…. but they couldn’t answer. Or at least not in a language I could understand)

Today I had a bonus sort of day off work, as a VIP was visiting and we weren’t allowed in the building until after they had left, so I decided to join up with the hiking group and get outside!

Each week there seems to be an early hike starting at 7:30AM, at Rancho San Antonio in Cupertino, varying in the route slightly.

The view from the Vista Point down towards the Bay was kinda misty/foggy, but you could just make out the hangars at Moffett Field:

In the opposite direction it was blue skies, crispy grass, and trees: 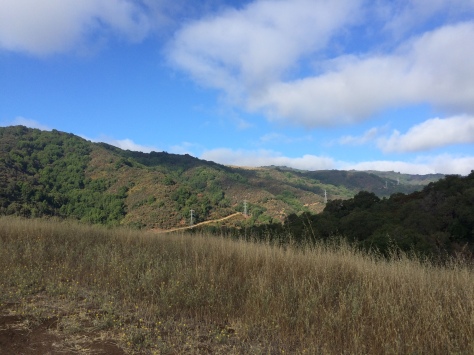 It was a good route, not too steep, but with a reasonable overall descent and ascent. We took it at a brisk, but not super fast, pace as a few people had work and appointments to get back to, we also saw some deer on the hike, including this little group that had very little fear: 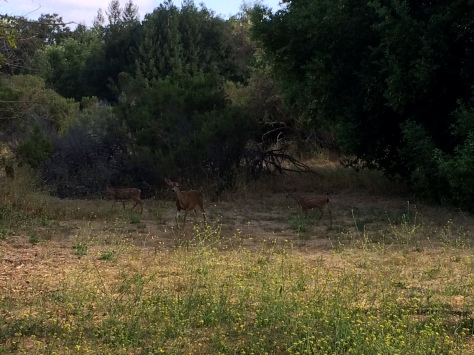 Me? Well I then spent most of the rest of the day at Great America.

This past weekend Andrew and I went to Portland, OR for the weekend for our Anniversary. 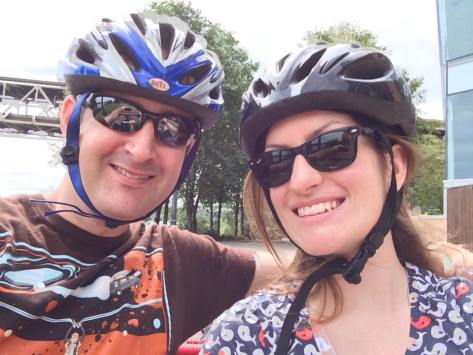 In amongst drives along the Columbia River Gorge to Bonneville Dam, and a trip to Bob’s Red Mill for some fun ingredients, we also rented a Deuce Coupe from Kerr Bikes in Tom McCall Waterfront Park, and took a short ride along the Waterfront Park Trail. They rent regular bikes, tandems, Surrey bikes and little go-karts style pedal bikes, with all proceeds going to charity.

The there-and-back-again route took us down to Marquam Bridge, then up to and across the Steel Bridge.

While on our way back across the bridge, a freight train came across…..

It was quite the vibration! I waved hello to the driver 🙂

The ride also crosses underneath the bridges of Hawthorne, Morrison and Burnside, and goes past the site of the Saturday Market, which despite the name, is also open on Sundays from March through Christmas Eve.

I would recommend it to anyone who enjoys a little bit of low-key exercise by the river on a Sunday morning!

So, turns out the US was nice enough to have a holiday for Mrs M’s birthday this year, and she decided what better way to start the day than an nice gentle hike. Unfortunately actual Madonna was busy, so instead we chose to hike at Mt Madonna. We have been to Mt Madonna before, which mostly involved hiking in the clouds, so this time was quite different. Thankfully the trails are mostly sheltered under the canopies of the <insert correct tree type here, I’m not sure exactly what they are but they are big> trees, and with it being another scorcher of a day here in the Bay, it was a little cooler up in the mountains, and a perfect day for a hike. We set off early and collected our fearless leader D’Ivy [Dog Ivy, as opposed to our human friend of the same name, H’Ivy]. After a windy (that’s winding roads, not a blustery gale) drive up Pole Line Road from Hecker Pass Hwy, we reached the main entrance. Expect to pay $6 to the friendly Park Ranger Person, and then be on your way. We parked by the Amphitheater and made sure to start our various FitBits, watches and phones to record our progress.

Setting off along the Upper Miller Trail, we joined Blue Springs Trail and continued to descend (much to Steph’s delight) to meet Pole Line Road. More shady downhill sections followed as we took BlackHawk trail along the creek (which, unlike its name suggests does not contain any actual water). BlackHawk Trail is only partially open, as landslide activity has permanently closed a large section of the trail after the junction with Contour Trail. This diversion means taking Contour Trail towards Ridge Trail, where there are options for a long loop (continuing to Sprig Recreation Area and the start of the Merry-Go-Round Trail), or a shorter alternative via Tie Camp Trail.

Opting for the shorter route, as things were hotting up and we didn’t fancy the full extent of the climb back from 560ft, we continued our Hike along Tie Camp Trail,  starting at around 1000ft and winding its way slowing back along the ridge under the trees to intersect Merry-Go-Round at around 1400ft. Here the climb becomes a little more exposed…

After a half mile, we took Loop Trail heading south until it meets the cut-off, which was our only option at this point as the main Loop Trail was closed. After a short but fairly steep climb up Loop Trail Cut-Off, we reached Lower Miller Trail, and soon after the car park was visible again. Clocking just about 5 miles, and nearly 1000ft descent/ascent, we totally deserved a Stack’s brunch, so we set off back down the mountain and headed to Campbell to continue Wife’s birthday celebrations.

Lindsay’s Notes: I would recommend doing this hike backwards, particularly on a warm day, as the later portion of the hike is much more exposed, so better to do this going downhill than to have sunshine and incline, and then the uphill hike will be nice and shady 🙂