Yesterday was my last day at work.

It was a happy day as it means that I now have one month off, then Orientation begins, and I get one step closer to being a qualified Clinical Laboratory Scientist.

To mark the occasion, instead of my friend Brooke and I doing our usual Insanity or random Keaira LaShae YouTube workout, we decided that three of us from our team would go for a walk in the Wildlife Refuge that was just near where we worked.

The Don Edwards San Francisco Bay National Wildlife Refuge actually covers quite a lot of the South Bay Marshland, including all the old salt ponds, where salt production used to occur, and in fact still does to a limited extent in the area near Fremont.

You can download a full trail map of this area, and also the area near Alviso here.

This was just a sightseeing walk rather than a hike, very low intensity and casual, we parked at the Visitor Center and took the Tidelands Trail to the top of the hill, where you can take a little extra stroll to an overlook to look out across the bay:

We then crossed the bridge over the Newark Slough, walked along the trail, and then back across the bridge.

All in all, it was only about 2 miles, and with only approximately 144ft ascent to the top of the hill, but it was surprisingly peaceful and picturesque, especially considering the proximity of the area to the Dumbarton Bridge, and that it was rush hour for everyone else.

There are also a few interesting things to look at, such as an old duck hunting cabin, abandoned since the 60s/70s, but that still has the owner’s decoy ducks hung up inside:

… a nice picnic shelter, right over the marsh:

…and there is also the slightly disgusting, but kind of interesting sight of water coming out from under the pump house: 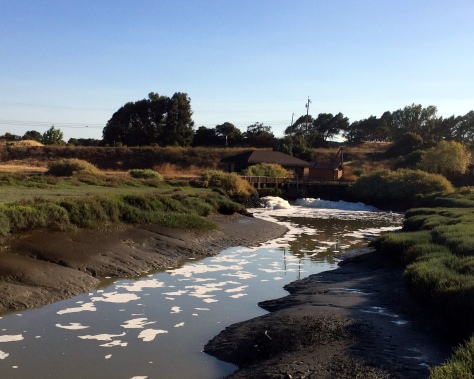 Interesting, because dissolved proteins in the water cause the formation of froth as the water is aerated by the action of coming out of the pipe, apparently in much the same way as you whisk egg whites…….

Yet somehow quite hypnotic to watch.

We were really quite pleasantly surprised by how nice it was, but this might be in part because the Bay was not at all stinky that day, especially in comparison to usual!